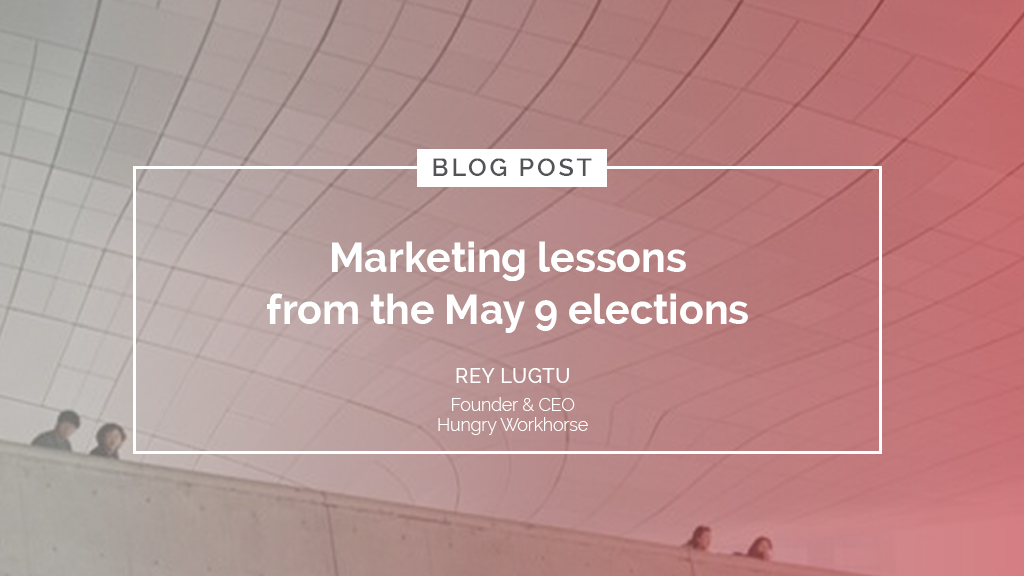 The post-election dust has almost settled and new national leaders will soon be proclaimed. As a marketing practitioner and teacher, I can’t help but synthesize what marketing practices can be learned from the election campaigns. The concepts are, in general, the same. Candidates are “products” who need to be marketed in order to be “bought” by the people through votes.

Here are some of the salient lessons that can be gleaned.

Know and understand your customers. In previous article, I wrote about understanding the masses in the context of the elections. Majority of the Philippine electorate comes from the socioeconomic D and E classes, which comprise 75 percent of the population. I wrote that any political candidate “needs to understand the masa persona by defining his or her personality, frustrations, needs and wants, and motivations, to win their hearts and minds,” and that “condescending or patronizing messages will always backfire and even alienate them as proven in several marketing case studies.”

In a CNN Philippines interview, political consultant Greg Garcia said that “people do not like confrontations.” The combative stance of the Robredo campaign with slogans as “our generation’s fight” against Marcos backfired, he said, adding that Filipinos just wanted “to get back to normal,” coming from the hardships of the pandemic, and “they don’t want any trouble.” This is the persona of the average Filipino voter. Just like wooing a customer, political marketing messages should be crafted based on wants, needs and motivations of the Filipino voter.

Craft the right messaging. By understanding the customer persona, a marketer can now craft messages that will resonate in hearts and minds. The “unity” slogan of the Marcos campaign was single-minded. Garcia said “they knew that unity was important” to Filipinos emerging from the pandemic. The messaging was consistent and focused.

The Robredo campaign, on the other hand, delivered mixed messages. The tagline “Gobyernong tapat, angat buhay lahat (Honest government, a better life for all)” was not aligned to the sentiments of most of the Filipinos who had given high approval ratings to the Duterte administration. “Tapat” was not the problem, Garcia emphasized, yet the Robredo campaign latched on to it. Before that, there was “Kulay rosas ang bukas (The future is pink),” which Garcia described as “esoteric.” This messaging only excluded most Filipinos and instead created a “clique” that the common voter did not understand.

Utilize the right channels. After right messaging comes the appropriate delivery channels. Marketers need to understand which channels are the most effective with a limited amount of time and resources.

The recent election was a battle of rallies, with one camp brandishing size and scale over the other. Both the Marcos and Robredo campaigns reached equal scale when it came to this.

But the Marcos campaign dominated social media, starting as early as 2016. According to research by ABS-CBN News, “posts of or about Marcos and his family… registered more than 700 million reactions, comments and shares on Facebook since 2016” — the biggest among the presidential candidates.

Moreover, the Marcos campaign opted to not to use public debates, instead focusing on political rallies, social media and select TV interviews to deliver its message.

It might be worth noting that in a November 2019, Harvard Business School article about campaigning for the upcoming 2020 US presidential elections, business administration professor Vincent Pons said: “There’s this perception that debates are this great democratic tool, where voters can find out what candidates stand for and how good they really are.” citing the results of a study of elections in several First World countries. “But we find that debates don’t have any effect on any group of voters,” he added.

Create the right content. Since 90 percent of the information that comes to the brain is visual, the content strategy should be aligned to the messaging to engender an emotional connection. The “unity” tagline of the Marcos campaign was translated into visuals of working together toward progress. This was executed with the use of the Philippine flag in rallies and social media ads, coupled with the “Umagang kay ganda (Beautiful morning)” jingle that resonated well with the audience.

In the end, having a sound marketing strategy that was consistent, aligned and focused did the trick for the Marcos campaign, which resulted in Ferdinand “Bongbong” Marcos Jr. garnering the majority vote. 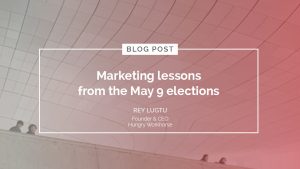 The author is the founder and CEO of Hungry Workhorse, a digital and culture transformation consulting firm. He is a fellow at the US-based Institute for Digital Transformation. He teaches strategic management in the MBA Program of De La Salle University. The author may be emailed at rey.lugtu@hungryworkhorse.com.